There is included in a charter dated 27th August 1536, confirmed by James V, 14th January 1537, R.M.S. 1677, by John Lamond of Ardlamont to his relative, Sir John Lamond of Inveryne, signed at Tollert (present day Toward), the gift of the chapel of Auchingille, the ruins of which are marked and situated near Tollert Castle on a map of Cowal in 1731. The chapel was dedicated to the Virgin and was situated on Toward-an-uilt, and its ruins, consisting of an ivy covered south wall, form the back wall of Toward Castle gardens. It and part of the chancel show it was a large building of two stories 50 by 27 feet, with walls of 4 feet 2 inches thick. There is no trace of a graveyard, the surrounding ground being all leveled down. The chancel gable containing the altar window is converted into a door of peculiar design, to a family burial vault, and probably this east wall had a belfry. The windows, four in number, 16 by 8 inches and one 2 feet 4 inches by 2 feet are all deeply splayed and have stanchions, and those in the upper storey were larger, but do not seem to have had tracery of mullions and are built with several recesses in the internal walls. 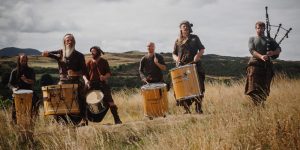